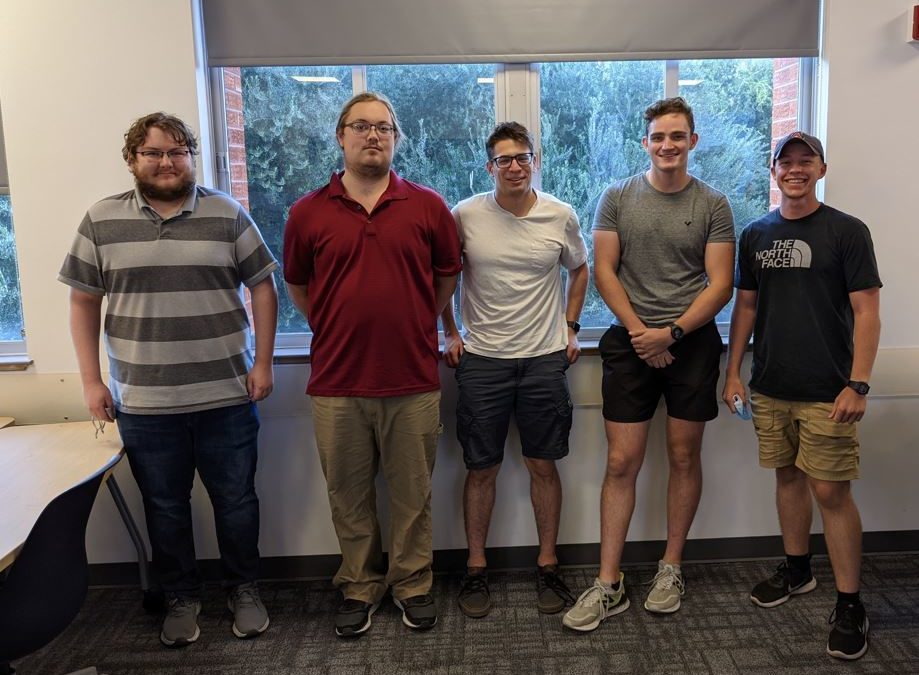 To test the accuracy of these sensors, technicians apply a pre-measured amount of force to a sensor system, then see if the sensor gives an accurate reading. However, these highly sensitive sensors are often impacted by other environmental factors.

“The GEOST facility in particular, where they do satellite and optical systems, is near the interstate, so if there’s a truck driving by when they’re doing a test, they can see that spike,” said Stephen Ponder, Team 22060 co-lead and procurement co-lead. “It’s super important to isolate everything in the testing environment, so you can see how things are affected alone.”

Team 22060’s task is to create a torque and force measurement system for a satellite which eliminates external interference and imitates the environment of space. This way, when scientists apply force or torque to the satellite in a test, they’ll know that the satellite is responding the same way it would if it were in space, where there aren’t atmospheric disturbances

There are systems, including one being developed for the James Webb Space Telescope, designed to mitigate the effects of the surrounding environment, but the team is designing a much more affordable system to meet GEOST’s specific needs and absorb as many external frequencies as possible. To do so, they’ll use a combination of rubber shock isolators, a suspension mechanism, a granite slab, and what they call “magic boxes,” which are designed to isolate specific frequencies.

“We’re trying to utilize multiple techniques so we can tune our testing system to the specific environment,” said Michael Gaines, project and procurement co-lead. “That will allow us to help isolate specifically what they want to measure and keep all of the external vibrations and forces from messing with their measurements.”

“I’m going into the Air Force, so I found it to be sort of a natural progression to learn some of these things,” Ponder said. “Both for myself and to help the institution as a whole figure out what steps are needed to allow students to get clearances and complete classified work during senior design.”

The team members appreciated that they’ll be able to gain experience with classified work, without the stakes of it being a technically classified project. They’re taking it seriously, but there’s room for mistakes, if they happen. They’re collaborating closely with the university’s Applied Research Corporation.

“The University of Arizona – Applied Research Corporation is excited to participate in this years Capstone program,” said Henry Empeno, director of security at the ARC. “This is a tremendous opportunity for UA-ARC to develop and support security compliance requirements for the first-ever ‘mock classified’ project in order to prepare Team 22060 for future classified opportunities in the aerospace and defense industry.”

The team is also enjoying working together and sharing the different expertise they’ve developed over the course of their college careers.

“I think what’s really cool about our team is how quickly we’ve been able to come together and focus on a specific goal, and kind of track that problem from different angles,” Gaines said. “I don’t think that teamwork is going to be a challenge for us, because we work well together.”